Home Guides Can you use LED bulb in the fridge?

LED bulbs are solid-state devices, meaning they don't require any moving parts. Instead of a filament or gas inside the bulb, an LED is made out of semiconductor materials like silicon and/or gallium nitride (GaN).

Because it's solid-state, an LED is more resistant to extreme temperatures than other types of lighting like CFL. Since LEDs are not as likely to heat up or cool down as much as CFLs or even traditional incandescent light bulbs (that screw into regular sockets), they're unlikely to experience thermal shock the way other types of lights might.

They're also unlikely to break during temperature changes because they don't have any gasses inside them that could expand and make them break. Additionally, LEDs can be used in higher-temperature applications like ovens and burning hot areas like the inside of a clothes dryer.

With all that said, you should still take precautions with LED bulbs when it comes to extreme temperatures. Even though they're unlikely to break at low temperatures or high ones, there are certain risks involved. LEDs get dimmer as they heat up; this means that if you were to use an LED bulb in a cooler area (like a refrigerator) and the temperature rises too much, the light emitted could be significantly lowered.

Similarly, using an LED bulb outside on a cold day is not necessarily dangerous for the bulb itself because the change in temperature won't be significant enough to cause damage — but we do hesitate to recommend using LED bulbs outside in areas where the mercury is at or below 32°F (0°C). This is because LEDs typically do not perform well in colder climates. Most LEDs are built to operate in temperatures around 77°F (25°C), so colder environments can cause problems like decreased light production, shorter lifespans, and more.

Despite the potential risks that come with using LED bulbs in extreme environments, there's no need to panic—LEDs are likely just fine for use anywhere except when the mercury dips into the negatives. Additionally, some LED manufacturers to claim their products can withstand even lower temperatures than that — though we don't recommend testing it out yourself!

What are the risks?

The main risk in using LED bulbs in extreme temperatures comes down to the lifespan of the bulb. Most LEDs are built for climates where the temperature fluctuates between about 40°F and 100°F (4°C to 38°C); if you go outside that range, you're more likely to experience problems with light production or your energy bill.

As mentioned above, many LED manufacturers claim their products can handle lower temperatures than that, but this doesn't mean they will always outperform how they do when used under normal circumstances. We recommend taking precautions when possible so you don't have to replace LEDs more often than you have to. But why LED bulbs in the fridge are better than traditional ones?

Firstly, LEDs are the bulbs that emit a minimal amount of heat compared to traditional bulbs. That's why it is better to use LED bulbs in the fridge.

Secondly, using LEDs in a refrigerator has fewer risks than using them anywhere else too. Since the temperature inside your fridge never varies significantly, there's no danger of thermal shock or of breaking if you put an LED bulb into one of the regular sockets that come with the unit.

Moreover, LEDs are more efficient and energy-saving than traditional bulbs. Thus, you won't have to worry about wasting energy if an LED bulb breaks in your fridge because LEDs use so much less power than the old-fashioned incandescent light bulbs do.

The light temperature and appearance are the same, but the way it spreads is different. The LEDs spread light in a specific spot where there's a need for lighting and the traditional bulbs spread the light to every part of the room. That's why we recommend using an LED bulb in the fridge.

What precautions should you take?

The main precaution we suggest when it comes to using LED bulbs in extreme temperatures is simply reading and understanding your LED warranty (if applicable) and following any instructions provided by manufacturers who claim their products can go beyond certain thresholds of cold or heat. Beyond that, however, there isn't much you need to do should you decide to use an LED bulb outside on a cold day — just don't leave it outside under those circumstances for too long!

You also need to make sure you're not placing an LED bulb in a socket that's too hot from the sun. This could lead to damage as well, but it won't be a result of temperature per se — it will simply be a byproduct of your solar light being left out in the elements without any protection for extended periods.

Things to consider when selecting a LED bulb for the fridge 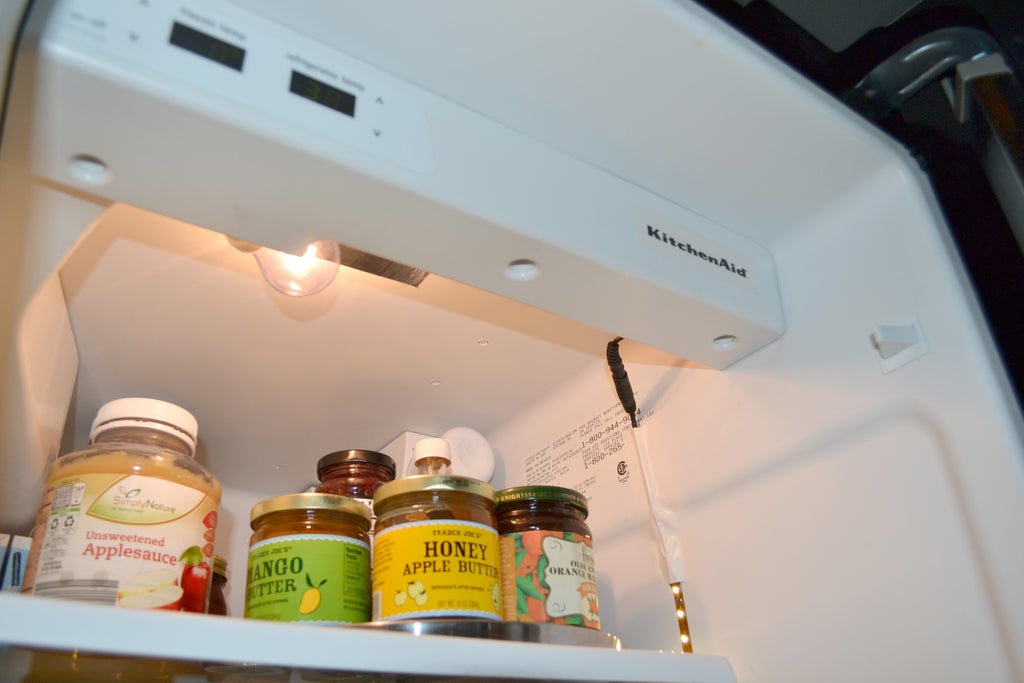 What about freezers and refrigerator compartments?

If you wonder whether you can use LED bulbs for the freezer or refrigerator compartments, the answer is no. LED bulbs are not made to emit ultraviolet rays which cause food spoilage, so they aren't suitable for use in these areas of your fridge. It differs from the fridge department as this LED bulb for the fridge is made to help you save energy and money, not to cause food spoilage.

What about those refrigerator lights that stick onto the front? Can they be used with LED bulbs? Well, this type of light does use LEDs but is different from LED bulbs.

Regarding putting the LED bulb in the refrigerator, it doesn't matter what kind of lighting mechanism you're using as long as it's an approved type of lighting (covered by a warranty) that fits into your standard household light fixture. But if your goal is to create more visibility within your fridge by having additional lights, sticking on-the-door lights will most likely fulfill your needs.

The price tag is higher than the temperature

One more question to solve - why these LED bulbs for the fridge are more expensive than temperature, and why some LED bulbs can not be used in fridges?

Demand for more efficient lighting has risen substantially since the government passed laws that have led to the increased use of LEDs. As a result, there are now many companies looking into ways to develop their own version of LED bulbs to replace traditional incandescent ones.

So far, they've done pretty well! LEDs are much better than other types of lights in terms of their energy efficiency, which saves people money on energy costs each year. They also last longer so you won't have to worry about constantly running out to buy new lightbulbs. With all these great qualities it's no wonder that so many people want this type of inside their fridge!

Can you leave the fridge without a bulb at all?

One can argue that it will be more efficient to replace whole light fixtures rather than just the bulb. So if you don't want to spend money on LED bulbs for the refrigerator, it's better to purchase a new fixture with LED lighting. And, of course, there are also fluorescent tubes to try. But you should not forget about saving energy or spending less money!

You may have heard that LEDs are sensitive to high temperatures which is why they're not suitable for use in fridges. This is indeed true - these types of lights cannot survive long periods where their operating temperature could drop below -40°C or go as high as 100°C. This makes them ill-suited for any purpose where they'll be exposed to extreme temperatures.

Another reason why LED bulbs for fridges are such a smart energy-saving choice is that they take very little power compared to other types of lighting. For instance, let's take a look at how many watts it takes to power an LED bulb as opposed to a standard incandescent one:

Not only does this save you money but it also helps preserve our natural resources and contributes less to polluting the environment! LEDs use only about 5% of the electricity used by traditional light sources which means we can keep our planet healthy while simultaneously lowering our energy bill. And since these lights will last up to 20 years or more, there's no need to keep replacing them like you would with other types of lighting.

When it comes down to it, LED bulbs for fridges are more expensive than their traditional counterparts. But this is only because they're newer and since demand has increased so has their cost. LEDs are here to stay, however, as they'll only get better over time!

That means that buying these newfangled energy-efficient light sources is definitely worth your while since you won't have to make replacements every year like you would with incandescent bulbs. As far as whether or not they're suitable for use in fridges goes, just do what most people do and buy a light fixture designed especially for your fridge to make sure it's up to the task.