We all use LED lights in our daily lives, but do you know who invented them? Let`s dive into the history of LED technology invention.

The English experimenter H. J. Round of Marconi Labs discovered in 1907 the phenomenon of electroluminescence using a silicon carbide crystal and a cat's whisker detector. In 1927, Oleg Vladimirovich Losev independently discovered the same effect and gave it the name "electroluminescence." This step was quite important because it essentially paved the way for modern LED technology.

In 1936, Georges Destriau discovered that when zinc sulfide (ZnS) powder is put into an insulator and subjected to an alternating electric field, electroluminescence can be generated. This was the first time that electroluminescence was observed in a solid-state material.

In 1951, Edward Jamgochian, Kurt Lehovec, and Carl Accardo described these first LEDs using a SiC crystal device with a battery or pulse generator as a current source and a comparison to a pure crystal in 1953. This was one of the first attempts to try and bring LED technology into the mainstream.

In September 1961, James R. Biard and Gary Pittman, working at Texas Instruments in Dallas, Texas, discovered near-infrared (900 nm) light emission from a tunnel diode they had created on a GaAs substrate. James and Gary also observed infrared emissions around 850 nm from a simple silicon p-n junction.

In the 1950s, visible-wavelength LEDs were used primarily as substitutes for incandescent and neon indicator lamps, and in seven-segment displays, first inexpensive equipment such as laboratory and electronics test equipment, then later in such items as calculators, TVs, radios, telephones, and watches (see list of signal uses). Until 1968, visible and infrared LEDs were prohibitively expensive; they cost around $200 each unit.

HP was working on practical LEDs between 1962 and 1968, when a research team led by Howard C. Borden, Gerald P. Pighini at HP Associates, and HP Laboratories conducted extensive research and development on them. HP applied for about 30 patents on LED technology and introduced the first practical visible-spectrum (red) LED in 1968. The first HP LEDs were made from gallium arsenide phosphide (GaAsP), grown by liquid phase epitaxy.

Early red LEDs were only used as indicators since the light output was insufficient to light an area. To make readouts readable, plastic lenses were applied over each digit in calculators. Later, other hues became readily accessible, and they started showing up in appliances and equipment. They have been used in TVs and computer monitors ever since, and in-car models beginning in the late 1970s.

LEDs are sold in metal cases, which were used for transistors up until recently. LEDs come in transparent molded plastic packaging that is tubular or rectangular in form and tinted to match the device's color. To block visible light, infrared devices may be dyed. 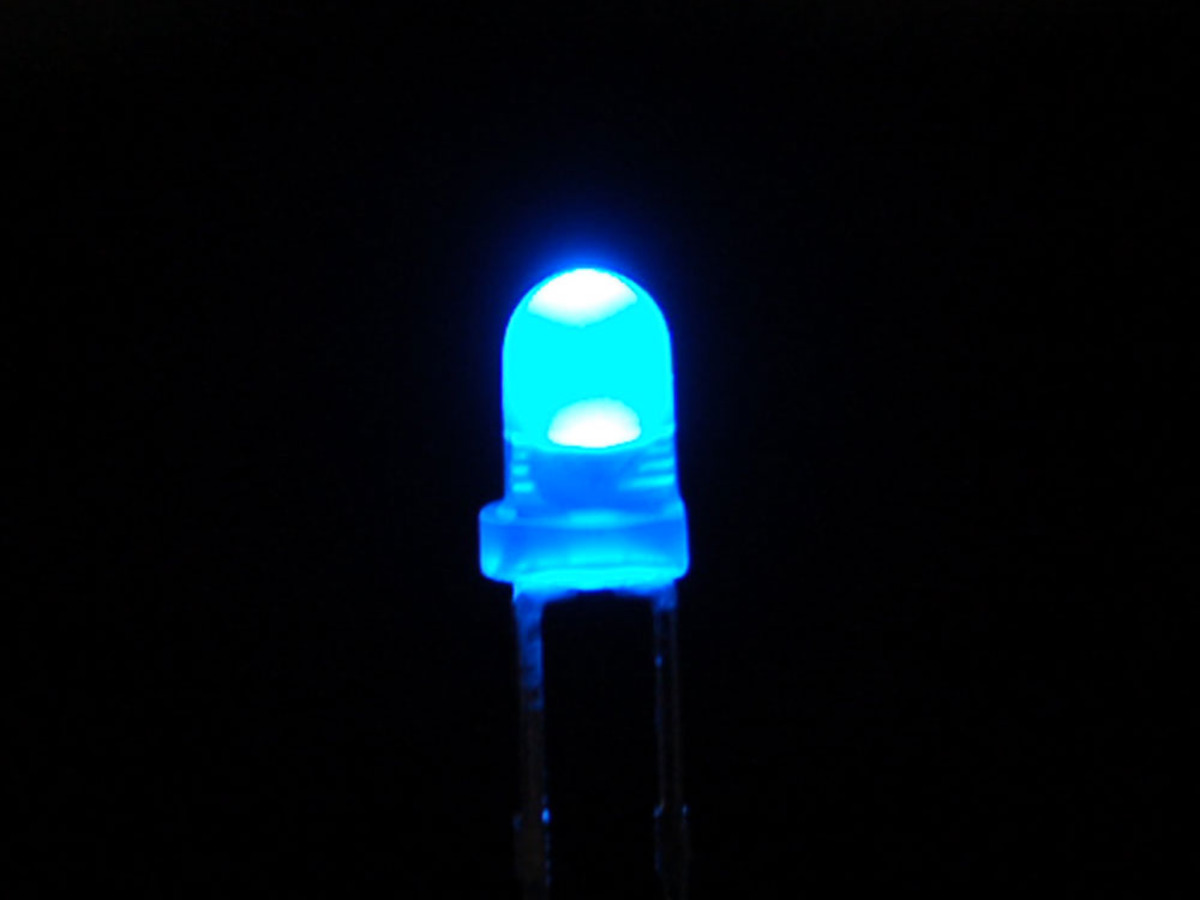 The first blue-violet LED made with magnesium-doped gallium nitride was created at Stanford University in 1972 by Herb Maruska and Wally Rhines, doctoral students in materials science and engineering.

The first high-brightness LED was developed in 1976 at RCA Laboratories by M. George Crawford, a former graduate student of Nick Holonyak, Jr., while working on gallium arsenide phosphide (GaAsP) materials. This work led to the development of efficient red and infrared light-emitting diodes (LEDs) using less power than earlier LEDs.

In August 1989, Cree invented the first commercially viable blue LED based on an indirect bandgap semiconductor, silicon carbide (SiC). SiC LEDs had poor efficiency; only about 0.03%, but they did emit in the blue portion of the visible light spectrum. It allowed miniature LED calculators and other inexpensive products to be powered by their own blue light.

In 1991, Isamu Akasaki, Hiroshi Amano, and Shujiro Hamakawa at Nagoya University developed the first high-brightness, high-efficiency GaN (gallium nitride) LEDs using metalorganic vapor phase epitaxy; this meant that more LEDs could be packed in a small space without excessive heat dissipation and that the brightness was 10x greater than before. They used aluminum gallium nitride (AlGaInN) as the material of choice because it possessed excellent electrical properties while being transparent optically.

The key breakthrough here was the discovery of a new way to grow AlGaInN on a substrate in such a way that it emitted light efficiently. After this, the use of LEDs spread throughout the electronics world with more and more uses being found for them. Inventor Yoshihide Nakamura was honored with the Millennium Technology Prize for his creation. For the invention of the blue LED, Nakamura, Hiroshi Amano, and Isamu Akasaki were honored with the Nobel Prize in Physics in 2014.

In 2001 and 2002, processes for creating gallium nitride (GaN) LEDs on silicon were successfully accomplished. In January 2012, Osram unveiled commercial high-power InGaN LEDs grown on silicon substrates, and GaN-on-silicon LEDs are now produced by Plessey Semiconductors. It is important to note that constructing a high-powered crystal GaN on Si with extremely low resistivity involves significant technological challenges. It's also tough to do. Furthermore, the wafer-level packaging of LED dies results in incredibly tiny LED packages.

Individual red, green, and blue LEDs aren't able to generate white light because only three narrow bands of wavelengths are generated. The first white LED was developed soon after the invention of highly efficient blue LEDs.

The development of the white LED is an important technological advance with wide-ranging implications. Not only can white LEDs be used for general lighting purposes, but they also have applications in medical diagnosis and treatment, food safety, plant growth, water purification, and security.

To our eyes, a white hue results from the combination of that yellow with the rest of the blue light. Fluorescence is used to generate green and red light through various phosphors. The combination of red, green, and blue lights is seen as white light, which has greater color rendering than wavelengths from the blue LED/YAG phosphor combination.

The ongoing development of white LEDs has been driven by consumer demand and competition in the market. Due to their energy efficiency, low mercury content, and long lifespans, LEDs are being used as an alternative to traditional lighting systems. With continued research and development into LED technology, it's likely that we'll see even more widespread adoption of these devices in years to come. 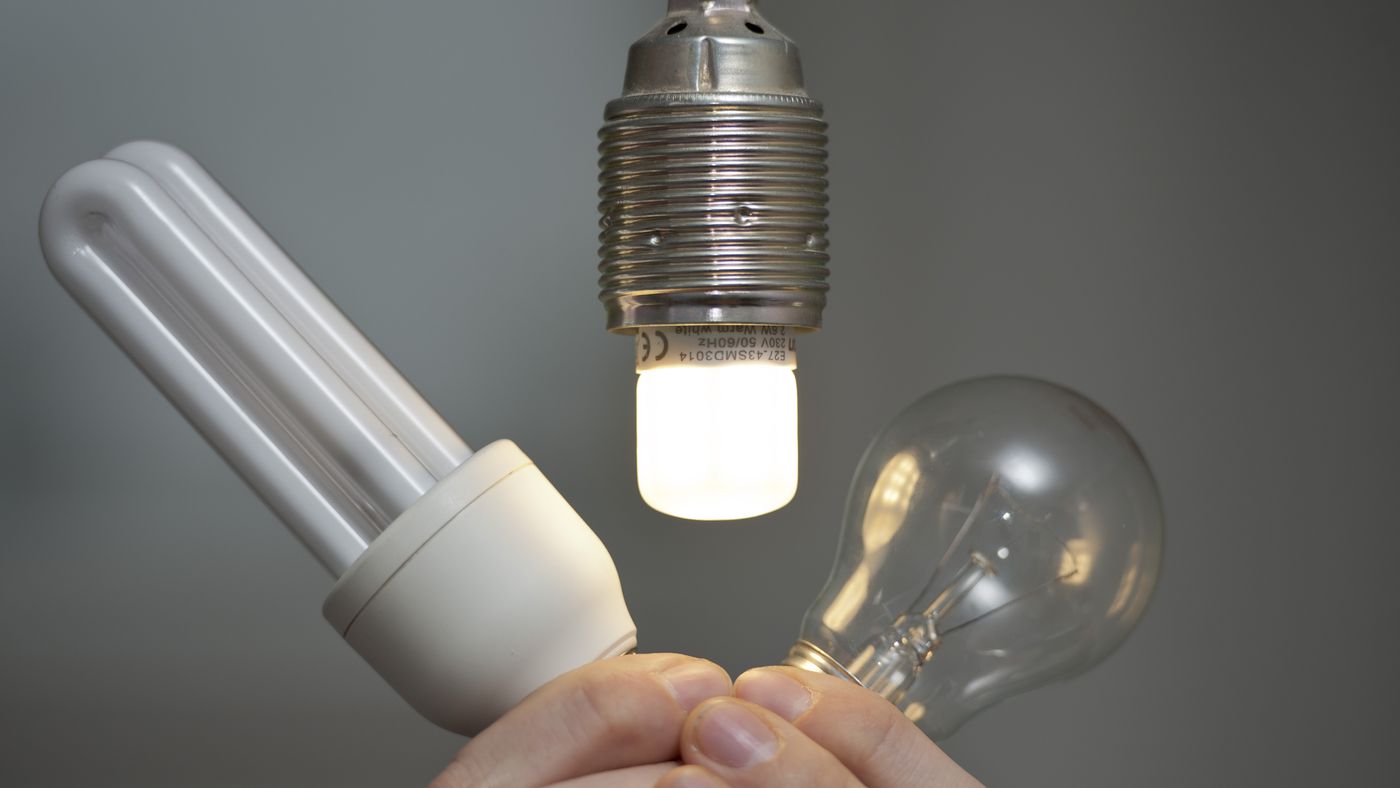 When did LED Christmas lights come out?

Since then, LED Christmas lights have become increasingly popular, with more and more people using them each year. This is due to their many advantages over traditional incandescent Christmas lights. LEDs use less energy, last longer, are cooler to the touch, and are more durable.

LED Christmas lights are now available in a wide variety of colors, shapes, and sizes. You can even find LED Christmas lights that blink or flash in various patterns. As this technology continues to evolve, we can expect to see more and more innovative designs for these festive decorations. So if you're looking for a new way to decorate your home this holiday season, consider switching to LED lights!

How is a LED made?

The first step in manufacturing LEDs is creating the substrate. Then, depending on which materials are used for the LED, researchers must create the different layers required for its operation. Commonly used materials include GaN, SiC substrates, InGaN dots on those substrates, and other such materials.

After the substrate is created, different layers are deposited on top of it using a process called molecular beam epitaxy. Once all the required layers are deposited, they must be patterned to create the desired structures. This is typically done with photolithography. After the patterns are created, they are transferred onto the material using etching.

Once all the required structures have been created, the last step is to connect everything together. This is typically done by depositing metals onto the surfaces of the different layers and then annealing them to create ohmic contacts.

After all these steps are completed, the LED is ready to be used. However, before it can be used, it must undergo testing to ensure that it is operating properly and producing the desired light. Over time, researchers are continuing to develop new materials, processes, and techniques that will improve LED technology even further.

What are the various types of LED lights?

Light-emitting diodes can also be classified according to their shape and size. The most common type of LED is the through-hole LED, which has leads that are inserted into holes drilled in a printed circuit board. Surface-mount LEDs have small, flat contacts that are soldered onto a surface of the PCB instead of inserted into holes.

Finally, there are organic LEDs (OLEDs), which are made from thin films of organic semiconductors. OLEDs can be extremely flexible and can be used in display technologies or as biomedical sensors or lasers.

Overall, there are many different types of LED lights that can be used for a wide range of applications depending on their size, shape, color, and material composition. With ongoing research into LED technology and continued improvements in efficiency and performance, we're sure to see further developments in this exciting field in the coming years.