What is an integrated LED bulb?

In an integrated LED bulb, the light-emitting diodes (LEDs) are mounted directly on the circuit board along with other components to form a lamp. These lamps look like a standard incandescent bulbs but save electricity and last much longer.

What is the difference between integrated and non-integrated LED bulbs?

Integrated LEDs do not require a separate engine to drive them like in conventional bulbs so they save on space and weight. They also provide better heat distribution than non-integrated LEDs because they dissipate heat through their own aluminum base. Integrated LEDs are often brighter than other types of light bulbs because they have direct contact with metal parts. They have fewer components, making them more durable for use outdoors.

Check Out These Replacement Integrated LEDs

When shopping for an integrated LED bulb, be sure to look for one that is "bulb-ready" or "integrated fixture." Bulb-ready fixtures have a built-in adapter that allows the bulb to securely fit into the socket. Integrated fixture bulbs have all of the components mounted on the circuit board and come with a pre-attached wire. Simply twist the integrated bulb into the light socket and it's ready to go.

As technology progresses, more and more types of LED are being developed. Among these are the integrated LED (ILD) and the light-emitting diode (LED). While both have their own advantages and disadvantages, there are some key differences between the two that should be considered before making a purchase.

Integrated LEDs are made by combining a semiconductor material with a lens and an electrical lead, which are then encapsulated in a plastic or epoxy resin. This type of LED is typically more expensive than a regular LED, but it offers a number of benefits. One advantage is that ILDs are less likely to experience problems with moisture and dust contamination, which can be an issue with regular LEDs. Additionally, ILDs tend to have a longer lifespan and are more efficient than regular LEDs.

However, there are some drawbacks to ILDs as well. One is that they can be more difficult to work with since the lead must be carefully positioned in order to make proper contact with the semiconductor material. Additionally, ILDs typically have a narrower viewing angle than regular LEDs, which can be an issue if you need wide-angle lighting.

Where do I find integrated LED bulbs? Integrated LED bulbs and fixtures can be found in hardware stores, home improvement stores, and specialty lighting shops. Some big-box retailers sell them as well but you will likely get a better selection by going to a store that specializes in lamps. Integrated LED light fixtures often come with on/off switches on the fixture itself, making them great for outdoor use where an electronic switch may not work properly due to weather or working conditions.

Looking for an LED that integrated lamp and trim with a medium base? Look no further than the SYLVANIA LED! This high-quality LED is backed by a 3-year warranty, emits a soft white light with a color temperature of 2700K, and has a lifetime of up to 25,000 hours. It's also suitable for use in damp locations and ships to all states except California.

What should I consider while choosing an integrated LED?

When choosing an integrated LED, be sure to consider the following:

When shopping for integrated LEDs, you may come across some of the newer LED bulb models that flicker or strobe. If this is an issue, check with the manufacturer to see if there's a fix and look at reviews online before purchasing them.

Integrated LEDs may flicker when used with a dimmer switch. If you are using a dimmer, be sure to buy an integrated LED bulb that is specifically designed to work with them. Many newer models are now compatible with most standard dimmers.

How to replace integrated LED?

In an integrated LED bulb, the light-emitting diodes (LEDs) are mounted directly on the circuit board along with other components to form a lamp. These lamps look like a standard incandescent bulbs but save electricity and last much longer.

Integrated LED bulbs should be removed in the same way as conventional light bulbs. The process is the same only with the use of an integrated LED. Simply twist counterclockwise until it detaches from its base or twist clockwise to tighten.

Some batteries have a soft plastic stem that you can pull on gently to remove, while others have a brass screw-in bulb. If replacing with a similar type of bulb, simply replace the old one and twist it into place until hand tight. 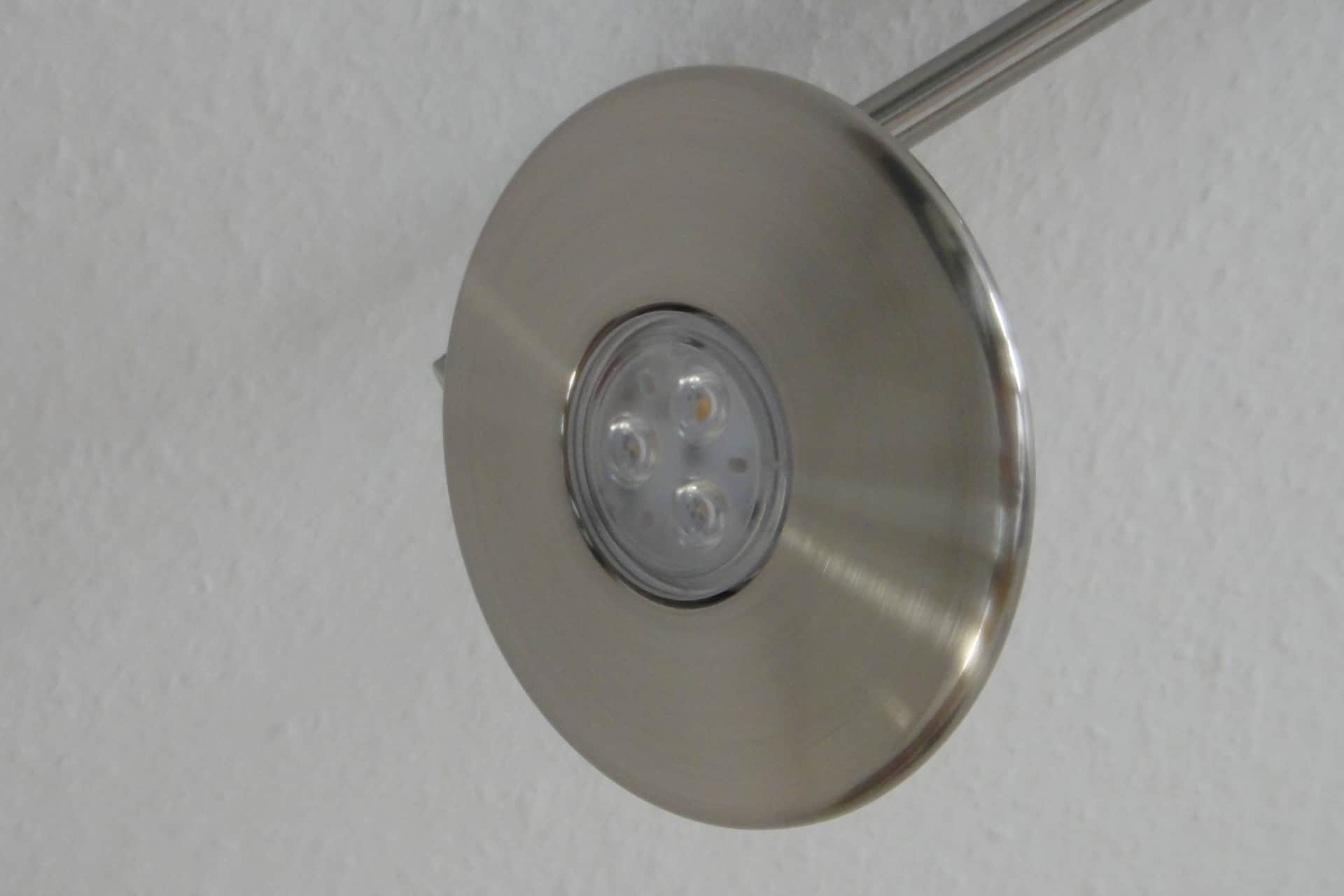 Steps on how to replace it:

Save Energy: Popularized by energy-efficient CFL bulbs, LEDs also use only about 10% of the same amount of lumens as incandescent bulbs. In fact, most LED bulbs use just 7 Watts of power to produce 800 Lumens of light compared to 60Watts from traditional incandescent lightbulbs that provide 810Lumens.
This is partly because LEDs produce more light per unit area than glass tubes, but also because they are more energy-efficient.

Long-Lasting: LEDs (light-emitting diodes), last around 10 times longer than compact fluorescent light bulbs and 100 times longer than incandescent light bulbs. It's not uncommon for LED lamps to last up to 50,000 hours or about 5 years if used for 3 hours/day. This is a big advantage over some other lighting technologies as CFL bulbs have been reported to last from 6 months to 2 years, while some incandescent lightbulbs can hardly reach 1,000 hours of use before burning out.

No UV Emissions: The narrow spectral emission of LEDs means that they do not emit ultraviolet radiation at all, making them safe even for usage in light therapy.

Heat Efficiency: Much like fluorescent lamps, LED lights do not produce as much heat as incandescent bulbs and thus, cannot burn or melt things easily by accidentally coming into contact with them. This also makes them more energy-efficient since they do not need to use quite as much power to achieve the same level of illumination as CFLs and incandescent bulbs.

Diversity: Traditional bulbs have a few basic shapes (A-shape, chandelier) whereas LEDs come in many styles including globe, candle, torpedo & novelty shapes. They are even available in flexible strips that can be cut to fit any space or tightly curved for accent lighting applications.

Instant On/Off: Unlike CFLs that take a few seconds to warm up and reach their full brightness, LEDs are ready to go when you flip the switch. They also turn off instantly without any flicker. Limited life at high temperatures: LEDs have a theoretical lifespan of around 50,000 hours which is great, but if they are operated above their optimum temperature range (which varies depending on the LED), their life expectancy will be reduced.

Fragile: LEDs are sensitive to physical shock and vibration which could cause them to break. They are also more prone to moisture damage than other types of bulbs.

Limited dimming range: Unlike incandescent and CFL bulbs, most LEDs cannot be dimmed down to a low level without flickering or turning off completely. This may not be an issue for some applications, but it is something to consider if you are looking for a bulb that can be used in a dimmable light fixture.

Color quality: While the color quality of most LED lights is good, it is not always perfect. Some people find the cool, bluish whites of some LED lights to be unappealing. This is something that will vary from one person to another and it may not be a big deal for some types of applications (such as general household lighting), but could be an issue for other types of applications such as display lighting, and food photography, or light therapy.

High upfront cost: One disadvantage of any new technology is the high initial cost to purchase components. With most LED bulbs selling at $15-$20 each, they still cost more than CFLs and incandescent bulbs on a per-lumen basis which makes them less economical choices for many people.
However, the long life expectancy of LEDs means that over time, they do become cheaper than traditional lighting options and can even pay for themselves in electricity savings if used regularly.

How bright are integrated LED lights?

Integrated LED bulbs are available in a variety of brightness levels, from around 60 lumens (equivalent to a 7-watt incandescent bulb) to 800 lumens or more.

Can integrated LED bulbs be dimmed?

Most integrated LED bulbs cannot be dimmed as they don't flicker as some other types of LEDs do when dimmed. However, some newer models are now available that can be dimmed to a certain level without flickering or turning off completely.

Where should I install integrated LEDs?

Integrated LEDs can be installed anywhere that incandescent or CFLs are used including business & commercial settings such as offices, hotels & restaurants; or in homes for general lighting.

In conclusion, while LEDs do have a few disadvantages, they are still a great choice for many types of lighting applications. Their long lifespan, high energy efficiency, and a wide variety of shapes and sizes make them a good option for those looking to reduce their environmental impact, save money on electricity costs, or just update their home's look with some new light fixtures.

With the cost of LED bulbs dropping all the time, it is likely that they will become even more popular in the near future.