A lot of mistakes can happen when working with LED strips so that, in the end, the lighting does not work at all or at least not to your satisfaction. So be sure to avoid mistakes! One of the most common mistakes is not adding a cooling, such as a heat sink, to your LED installation.

This may sound confusing, but LED strips should constantly be cooled. Not in the fridge and not with a fan, but every LED produces heat loss, usually around 50%. Unlike incandescent lamps, LEDs do not radiate this heat loss with the light but keep it inside.

However, if the heat loss remains in the LED for too long, its structure will be destroyed! The LED gets dimmer and dimmer, and the color can also change. LEDs - especially those with high brightness - should therefore be glued to a metal, ideally in an anodized aluminum profile! This can absorb the heat loss of the LEDs so that they do not overheat.

Don't think LEDs give off that much heat? Then touch the aluminum profile once after 30 minutes of operation! If the aluminum is so hot that you can hardly touch it, it is too small for your LEDs. 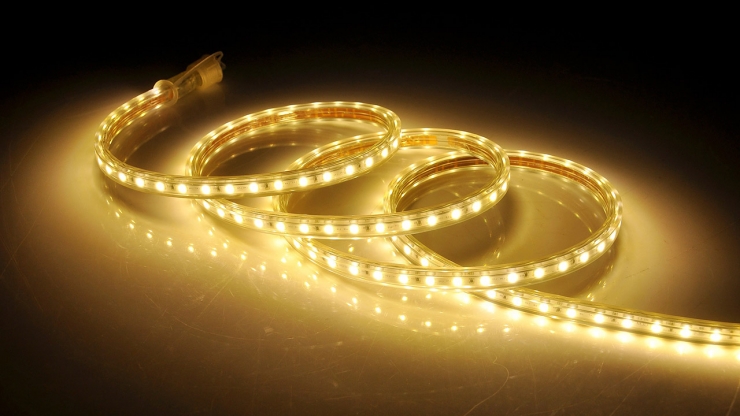 What happens when LED strips have no heat sink

In principle, LEDs are semiconductors that can generate light. And like the semiconductors in your computer, they need to be cooled. Correct temperature management is the most important factor next to LED current when designing LED lights.

With 300 LEDs and a 6500K color temperature, you'll enjoy an incredibly bright illumination with improved color quality. Simply use the control box to dim or brighten your LED lights to the desired level. The LED strip lights are also flexible enough to be mounted in various locations, making it perfect for lighting up dark rooms, cabinets, mirrors, and corners.

The aim here is to keep the temperature of the actual LED chip during operation below the maximum temperature permitted by the manufacturer. Depending on the LED type and manufacturer, this temperature is between 120°C and 150°C.

The computer usually has a fan – an aluminum profile such as a heat sink is sufficient for the LEDs.

That's why sufficient cooling is essential when using environmentally friendly semiconductor technology. LEDs only convert 35 percent of electrical energy into visible light. And this heat must be dissipated via the circuit board and a heat sink to avoid exceeding the maximum permissible working temperature of LED chips.

Not visible with built-in downlights, but indispensable: the black cooling rib is necessary for dissipating the heat with LED lights.

With an industry-leading lifespan and higher lumens output, this LED strip light is perfect for any application. It's easy to install, simply peel and stick the tape light or cut and reconnect for custom installations. Plus, it's rated for 65,000 hours of continuous use, so you can be assured it will last. And because it uses 12-volt low-voltage power, it's exceptionally energy efficient. The 3000K LED light color is comparable to warm-bright incandescent light bulbs, making it a great choice for any project.

The benefits of heat sink for LED lights

With passive cooling, the heat sinks of LED lamps and lights should always be large enough to dissipate the waste heat generated by the LED modules after commissioning. Nevertheless, the space advantage that the small LEDs have over incandescent and energy-saving lamps must not be lost entirely.

This is precisely why the developers have switched to using so-called extruded heat sinks made of thermally conductive aluminum for recessed lights and downlights, in the form of a so-called cooling rib or with fins arranged in a star shape.

This design increases the surface area of ​​the heatsink many times over, which has a positive effect on the heat dissipation to the environment.

The aluminum heat sink can hardly be surpassed and has long been standard in luminaire production in terms of weight, price, and mechanical strength.

Alternatively, there are much more efficient but more expensive heat sinks made of ceramic or copper. The customer is once again spoiled for choice here but, in most cases, opts for the aluminum variant because it offers better value for money.